Your one-stop guide on how to perform Ganpati puja at home during Ganesh Utsav!

We start the Chaturthi puja by bringing the ‘Ganpati’ idol home. The Chaturthi is believed to be the most auspicious day for getting the idol of our favourite lord home.

New Delhi: The much-awaited and revered 10-day long festival of Ganesh Chaturthi began this year on September 10. On Vinayaka Chaturthi, Lord Ganesha's birthday is celebrated. It is believed that Bappa visits the abode of his devotees and blesses them before taking leave but only with a promise to return the next year.

The festival of Ganesh Chaturthi is celebrated across the globe and majorly in Maharashtra. Much like 2020, this year too strict COVID protocol is in place due to the deadly novel coronavirus second-wave outbreak. Social distancing, wearing masks and gloves is the norm of the day.

In order to please the Ganpati, and make him visit your abode year-on-year, we tell you how to perform the special ‘Ganesh Chaturthi’ puja (prayer) at home.

Sit down with folded hands and take a note of all that goes into invoking the divine power with traditional rituals and customary practices.

We start the Chaturthi puja by bringing the ‘Ganpati’ idol home. The Chaturthi is believed to be the most auspicious day for getting the idol of our favourite lord home. However, when you set out to bring one, do keep the following things ready: Aggarbatti & Dhoop (joss sticks/incense), Aarti Thali (plate with lamps), Supari (areca/betel nuts), Paan leaf (betel leaf), a separate cloth for covering the Ganesh idol, another piece of Cloth for Sandli (made of sandalwood, used for carrying the lord), lastly Sandli.

The ‘Ganapati’ idol puja starts with lighting the agarbatti-dhoop (incense sticks) placed in an aarti thali. Then, place the paan leaf with a supari resting on top of it on the floor in front of the Sandli. Don’t forget to chant the golden mantra of ‘Om Gan Ganpatiye Namah’. If there is a pandit (priest) performing the puja for you, then do place some Dakshina (offering) for him and also for the artisans, who beautifully create such murtis (idols).

For people, who bring in the ‘Ganesh’ idol home before Chaturthi, need to cover the face of the murti with a cloth, and take it off only on the day ‘Ganesh Chaturthi’ puja is performed during murti Sthapna (installing the Lord Ganesha idol).

Now, once you have your lord with you and are eager to step inside the premises of your home, don’t forget to ask one of the family members to bring a bowl of rice. Shower the rice (kacha (raw) rice) on the murti before bringing it inside. Also, on Chaturthi, before placing the Ganesh idol on his Sthaan (pedestal), put some Kacha rice on it and rest a Supari, Haldi (turmeric), KumKum (red coloured sacred powder), Abhil and Dakshina.

After placing the newly-bought Ganpati idol home and that too following the exact rituals—there are certain requirements necessary to be met with. For example, we need red flowers, druva grass blades, modak (jaggery filled sweet), coconut, red chandan (sandalwood paste), incense and agarbattis.

The pious ritual of Ganesh Chaturthi puja starts with cleaning the entire house (and this is followed before the Ganpati idol is brought home). The entire family sitting for the puja should be ready after taking an early bath. It is better if you can invite a Pandit, qualified in performing pujas. The clay idol of the lord, which you placed on a clean, raised platform, will now see the mantras being chanted for invoking the God in it.

The customary practice of ‘Pran-Prathishtha’ (infusing life in idol) is one of the primary steps in this puja. Therefore, a specialised pandit is required to chant the holy mantras and invoke the lord in that murti.

The Pran-Prathishtha mantra in Sanskrit to be invoked is found in the Rig Veda and is part of Ganesh Suktha. After the pran-prathishtha of the murti is done with, the next step that follows is that aarti and lighting of the lamps and incense sticks. If a pandit is performing this entire puja for you, then you have the privilege of asking him to perform the shhodashopachara, which are 16 forms of paying tribute to Ganesh. Soon after this, offer 21 blades of Durva grass, 21 Modakas (they say Lambodra loves them) and some red flowers to Ganpati.

Then, put the red Sandalwood tilak (mark) on the forehead of the lord’s murti. Remember an old saying that breaking a coconut is auspicious to ward off evil? Yes, you have to do the same here. Try and break the coconut placed right in front of the Lord’s idol, however, if you are unable to do so, worry not, just place it there. Besides, don’t forget to keep some fried grains for Ganpati’s carrier—the Mushaka (the mice which carry the lord on him).

For your own good, try reciting the 108 salutations dedicated to Ganesh or read the Ganesh Upanishad. Also, while performing the Puja at home, there is always an option of flexibility. The rituals, which require a certain structure or many pandits for the chanting of mantras need not be done by you. Simply follow these steps and pray—the rest Bappa will do. They say—eat, pray and love. The more you worship with an open mind and sanctimonious thoughts—the more Ganpati will bestow you with wisdom, health, and prosperity.

Fold your hands and close your eyes, for God is listening. 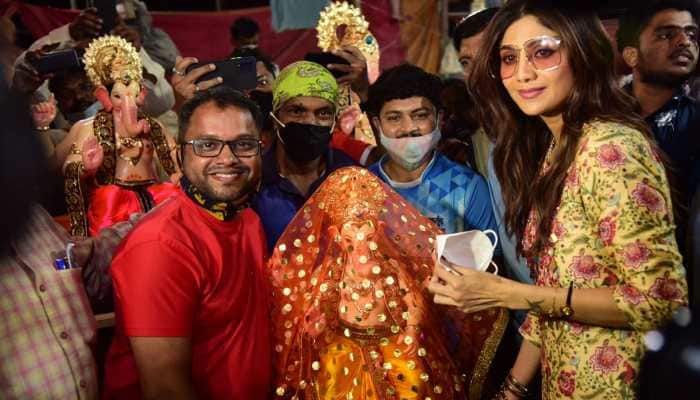 Shilpa Shetty poses for the shutterbugs as she brings Ganpati home 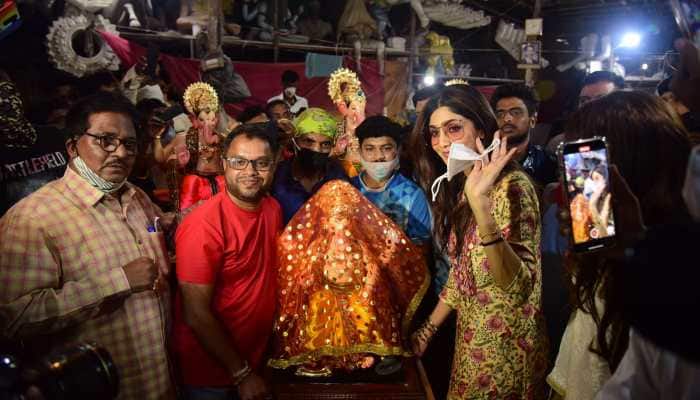 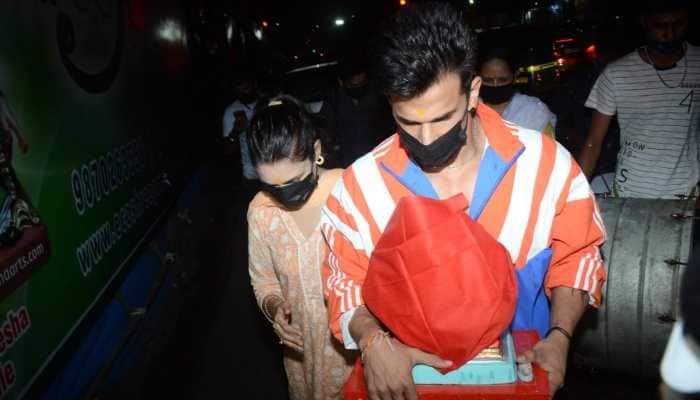 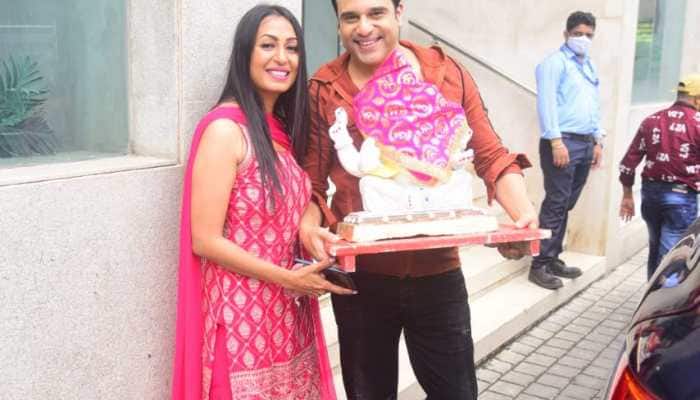 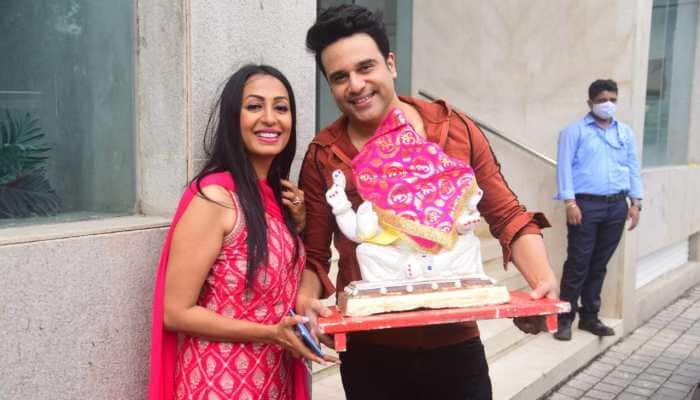 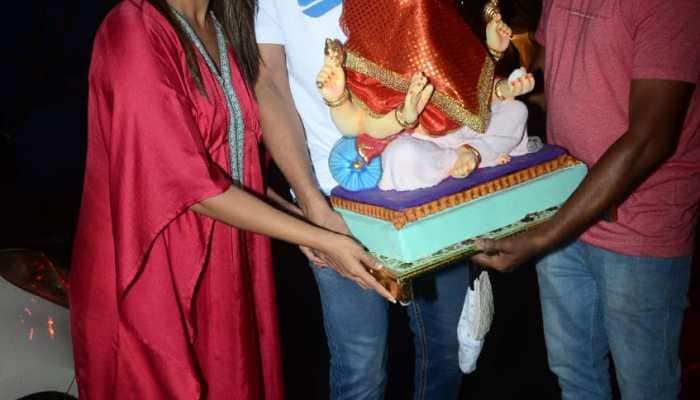 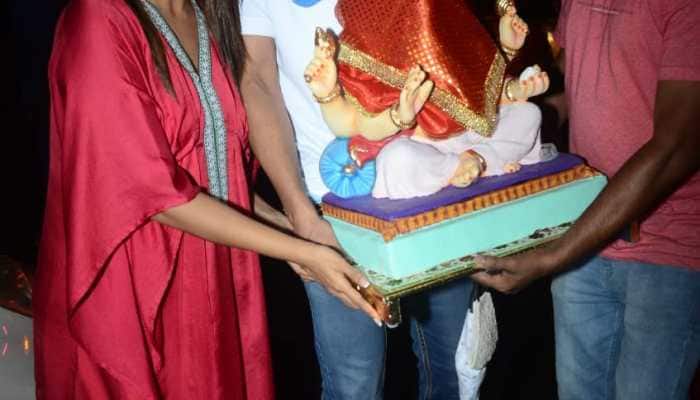 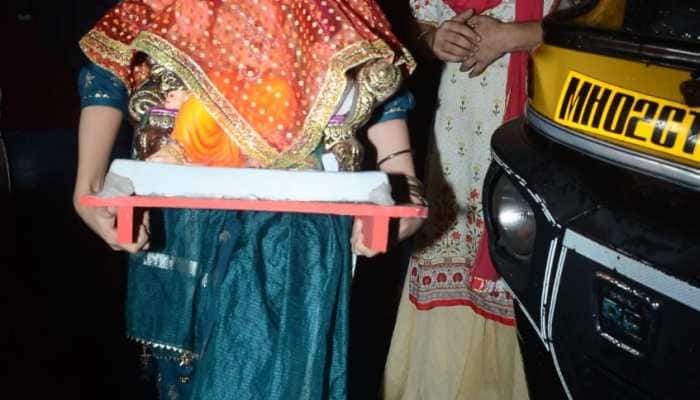