Mumbai and Rajasthan Royals opener Yashasvi Jaiswal was trolled on social media on Thursday (June 16) for scoring 0 in a 66-run opening partnership with Prithvi Shaw in the second innings of the match.

Young Mumbai and Rajasthan Royals opener Yashasvi Jaiswal silenced his critics, including teammate Prithvi Shaw, after taking 54 balls to get off the mark in the Ranji Trophy 2022 semifinal against Uttar Pradesh. Jaiswal notched up his third first-class century in just his third game at this level and moved along to 143 off 303 balls on Day 4 of their semis clash in Bengaluru.

Jaiswal was trolled on social media on Thursday (June 16) for scoring 0 in a 66-run opening partnership with Shaw in the second innings of the match. However, the young opener put all of that behind him to reach his second hundred of the match off 240 balls.

Jaiswal took as many as 54 balls to get off the mark in the Ranji semi-finals. Poking fun at his opening partner after the end of the day's play, Mumbai captain Shaw shared an epic meme to troll Jaiswal on Instagram. 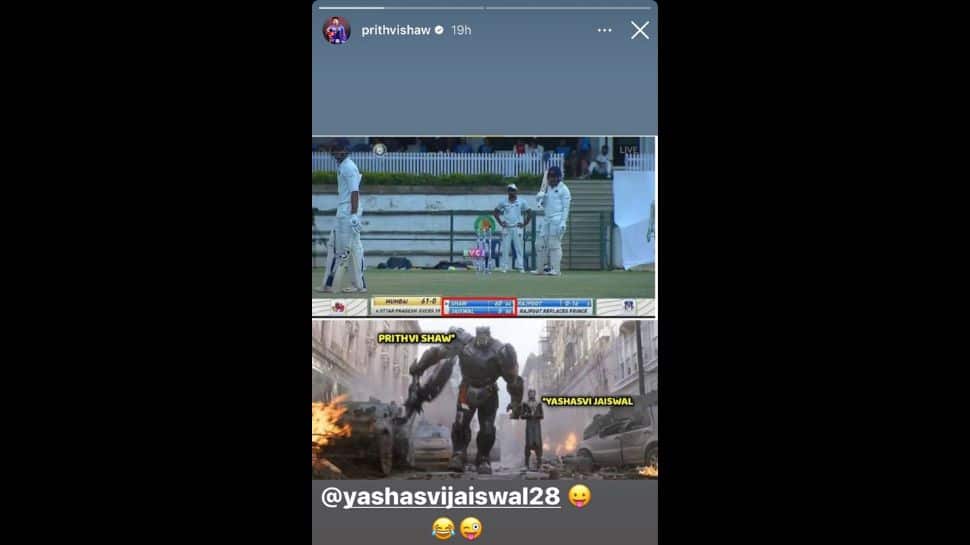 Earlier, Mumbai produced an incisive bowling display to bundle out Uttar Pradesh for a paltry 180 and take the crucial first-innings lead on the third day of their Ranji Trophy semifinal, on Thursday. Resuming at the overnight score of 25 for two, UP batters could add just 155 runs as Tushar Deshpande (3/34), off-spinner Tanush Kotian (3/35) and Mohit Avasthi (3/39) shared nine wickets between them for Mumbai. Dhawal Kulkarni (1/25) also chipped in with a scalp.

Skipper Prithvi Shaw made 64 off 71 balls with the help of 12 boundaries as Mumbai finished the day at 133 for one in their second innings, taking an overall lead of 346 runs. Mumbai had posted 393 in their first essay, courtesy hundreds by Yashasvi Jaiswal and Hardik Tamore.

UP lost wickets regularly after resumption with the 41-time Ranji Trophy champions dominating from the start. The first UP batter to be dismissed on the day was skipper Karan Sharma (27), who became Avasthi’s first victim.

Opener Madhav Kaushik (38) and Rinku Singh (16) tried to rally the innings, but managed to forge only a 32-run stand for the fifth wicket before the former was dismissed by Kotian.