Earlier, Arjun and Dewald were in the United Kingdom last month for an exposure tour organised by the Mumbai Indians, as per Insidesport.in. The tour will have atleast 10 T20 games against top clubs in multiple countries. (Sara Tendulkar and Arjun Tendulkar recreate ‘Munna Bhai-Circuit’ pose in viral Instagram story, check HERE)

Checkout the Arjun and Dewald's picture together below.... 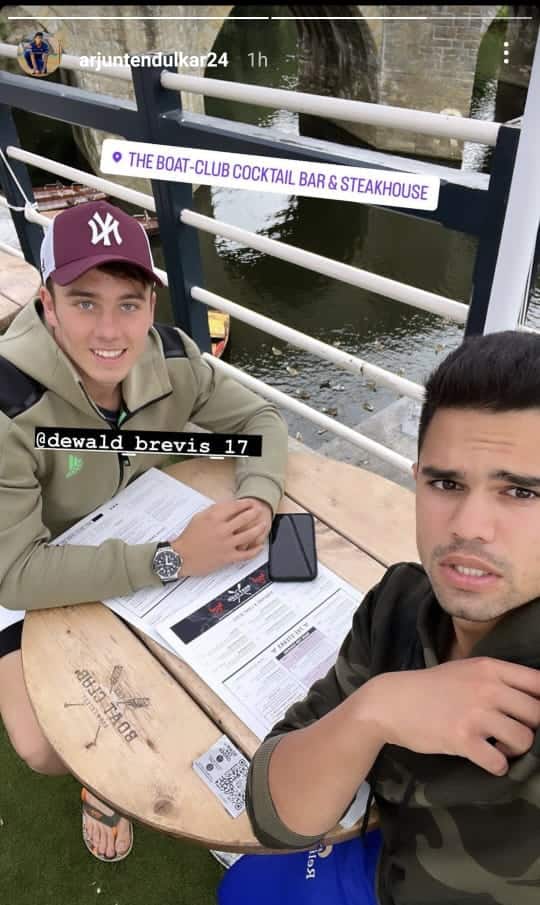 "NT Tilak Varma, Kumar Kartikeya, Ramandeep Singh, Hrithik Shokeen are some of the players who will get exposure playing against top T20 club sides in trying conditions. Arjun Tendulkar, who is also in UK and South African youngster Dewald Brevis are also likely to join the touring party," an IPL insider privy to the development told PTI on condition of anonymity.

After a stellar performance in the U19 World Cup for South Africa, Dewald Brevis was bought by the Indian Premier League (IPL) franchise Mumbai Indian (MI) for the 2022 season. However, MI finished at the bottom of the IPL 2022 standings but had some really promising performances from their future stars like Dewald Brevis.

Brevis was acquired by Mumbai Indians (MI) for Rs 3 crore from the Indian Premier League (IPL) 2022 mega auction. Nicknamed ‘Baby AB’, due to his similarities with former South Africa captain AB de Villiers, Dewald had an impressive run in the ICC Under-19 World Cup in the Caribbean. The Proteas U19 scored 506 runs in six games, including two hundreds and three half-centuries.