The first T20 between India and Ireland in Dublin on Sunday was reduced to 12 overs a side due to rain as more wet weather is predicted for second T20 on Tuesday.

Dublin weather IRE vs IND 2nd T20: Hardik Pandya-led Team India will take on Andrew Balbirnie’s Ireland cricket team in the second T20 match in Dublin on Tuesday (June 28). The opening match between the two sides of Sunday (June 26) was affected by rain as was reduced to 12 overs a side as a result. To the disappointment of the cricket fans, more rain is expected on Tuesday as well which might result in another stop-start fixture on a cold Dublin day.

The temperature will range between 11 and 19°C. The wind will be flowing from the southwest at 25-33 km/h.  The temperature in Dublin, Ireland on 28th June (Tuesday) will be 11 degrees Celcius at nighttime and 19 degrees Celcius in daytime according to weather.com. There are 77-83 per cent chances of rainfall. India is 4 hours and 30 minutes ahead of Ireland and the match will start at 8:30 pm IST (4 pm in Ireland). There are 98% chances of rainfall in the daytime and 24% at night. Humidity will be 76-81%. 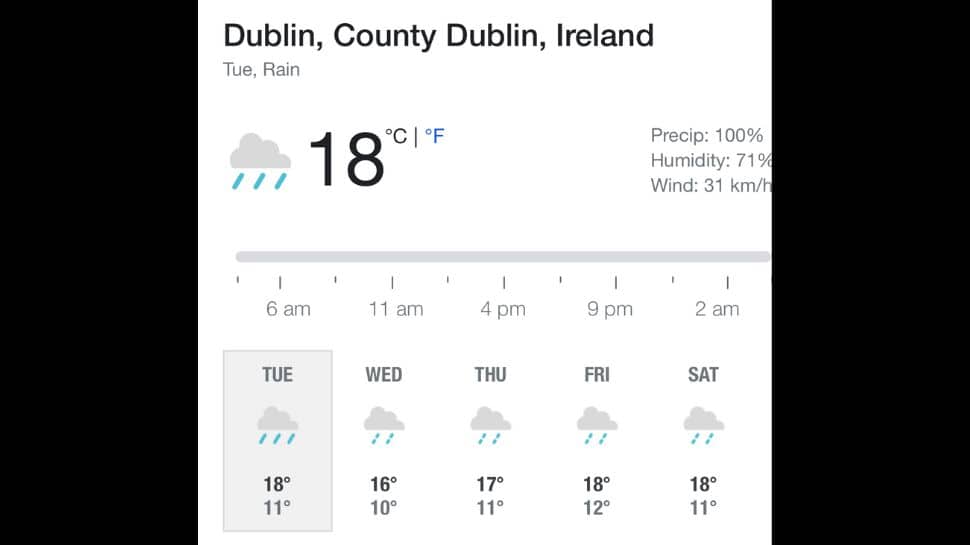 Meanwhile, Ireland pacer Craig Young believes that his bowlers have to be accurate with their bowling plans against India, saying that if one of them misses the spot, then the visitors’ batters can blast the balls over their head. On Sunday, in the first T20I, reduced to 12-overs-per-side due to rain, India chased down 109 with 16 balls to spare. In the loss, Young was the pick of the bowlers for Ireland, claiming 2/18 in two overs.

“There was enough in Sunday’s performance to take forward. It might have been nice to bowl first on that pitch, but in a 12-over game, the pitch isn’t going to change much. We know the Malahide wicket always has a little in it for the bowlers – you just have to put it in the right areas.

“You’ve got to get the line and length right with these guys, you`ve got that small margin of error – if you miss the spot then they (Indian batters) will blast it over your head. To be honest, I think we did get the line right most of the time, but we bowled a bit full at times, which let us down,” said Young ahead of the second T20I on Tuesday.