Team India captain Rohit Sharma had a dislocated thumb and was off the field from the second over of the Bangladesh innings in the second ODI on Wednesday (December 7). However, when the team needed him the most with 7 wickets down and 64 runs to win, Rohit came out to bat and smashed a whirlwind 51 not out to almost take India to victory.

Visibly in pain, Rohit smashed Mahmudullah and Mustafizur Rahman in the final two overs to take side to the doorstep of victory. Taking to Instagram, Rohit Sharma’s wife Ritika Sajdeh took a screengrab of her husband coming out to bat and captioned the post, “I love you, and I’m so proud of the man you are. To go out like that and do that.” 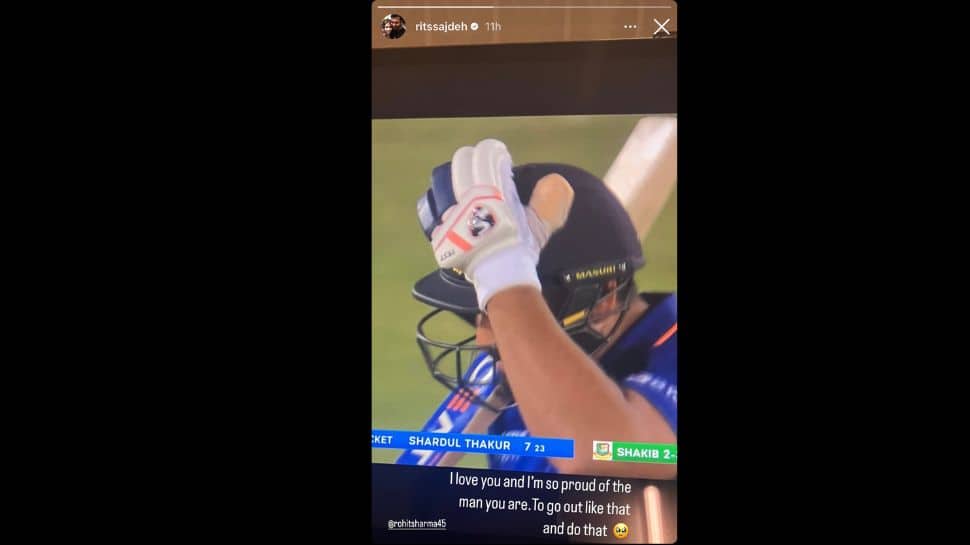 Rohit Sharma is all but out of the remainder of the Bangladesh tour, including the Test series as he will be ‘flying back home’ to consult experts after sustaining a finger injury, head coach Rahul Dravid said after the team lost the second ODI and series to the home team. The coach also informed that injury prone pacer Deepak Chahar and rookie speedster Kuldeep Sen has been ruled out of the third ODI in Chattogram with hamstring and back injuries respectively.

“It (thumb injury) isn’t too great. Some dislocation and some stitches. Fortunately, not a fracture and so, I was able to bat,” Rohit said at the post-match presentation.

However with Rohit himself confirming dislocation, it will take minimum three to four weeks for him to once again start batting in the nets. Dravid is always known to take a conservative route when it comes to confirming injuries.

Standing at second slip, Rohit was left with a bloodied hand when he dropped Anamul Haque off Mohammed Siraj in the fourth ball of the second over. He was escorted off the field by the team physio.