Alyssa Healy, who smashed 170 runs in the Women's World Cup final, became the first women cricketer to score 500 or more runs in a single edition of the tournament.

Australian opener Alyssa Healy on Sunday (April 3) broke the long-standing record of New Zealand great Debbie Hockley by scoring the most runs ever at an ICC Women's Cricket World Cup, during the final against England at the Hagley Oval.

32-year-old Healy, who smashed 170 runs in the final, overtook the record of Hockley (456 runs at the 1997 World Cup) as she became the first women cricketer to score 500 or more runs in a single edition of the World Cup.

Notably, Hockley slipped down to the third position as Healy and her opening partner Rachael Haynes took the top 2 spots scoring 509 and 497 runs, respectively. 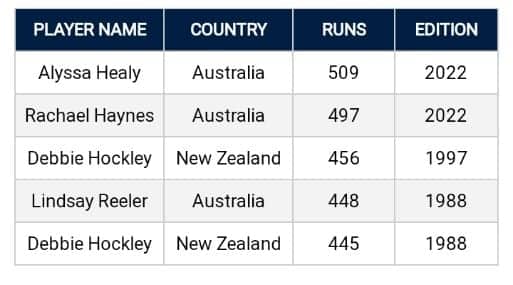 Earlier, Rachael Haynes, a veteran of 76 WODIs, overtook the record of Hockley when she cut England's Charlie Dean to the boundary during her innings at Christchurch.

Many batters had come close to beating Hockley's record of almost 25 years, with England's Tammy Beaumont scoring 410 runs at the 2017 edition and South Africa opener Laura Wolvaardt wasn't far off this year.

Wolvaardt had 433 runs heading into South Africa's semifinal against England but was dismissed for a duck in the semifinal clash as the Proteas were eliminated.

That paved the way for Haynes to overtake Hockley as she maintained her excellent tournament to date with another strong contribution in Sunday's final. The left-hander hit a superb 130 in the tournament opener against England, which Australia won by 12 runs, and scored another two half-centuries prior to the final.

Haynes was eventually dismissed for 68 runs in the final, caught by Tammy Beaumont off Sophie Ecclestone, taking her tally to 497 runs for the tournament at an impressive average of 71.

Meanwhile, Healy also became only the second woman batter to score a century in the World Cup final after fellow Australian player KL Rolton, who had hit a magnificent 107 not out in the 2005 Women's World Cup final against India, helping her side lift the trophy by 98 runs.

Healy smashed 170 runs off 138 balls, which included 26 fours, against England to help her side set a challenging 357-run target after they were put to bat first.

Also, Healy became the first woman to score a century in the semifinal and final of a World Cup edition as had scored 129 runs against West Indies in her previous game.

But it's hard to keep up with these record-breaking Aussies! #CWC22 https://t.co/RF5aSEqdpG pic.twitter.com/6kjiJxMDyA

She also pipped her captain Meg Lanning, who scored 135 earlier in the tournament, to register the tournament's highest individual score in this edition of the World Cup. All this in her first ODI World Cup edition.