PR Sundar is a Chennai-based popular options trader, Trainer and YouTuber. Meanwhile, some organisations who had committed for the sponsorship of his Options Conclave 3.0 have now said that they are withdrawing it. The Conclave was to take place in Cochin by the end of December.

New Delhi: Finfluencer PR Sundar is facing massive backlash in the social media for extremely disrespectful coment on women that he used apparently while on a heated argument with Twitter user. After PR Sundar's 'vulgar' comments on a Twitter user's daughter, a barrage of comments have flooded social media while #PRSundar64 started trending on Twitter.

Sundar has now locked his account, however the screenshot of his distasteful comments are doing the rounds in the social media. While replying to a tweet over verification of mark to market (M2M) gains, Sundar told a Twitter user "Your daughter is also virgin, so why worry, go and verify". 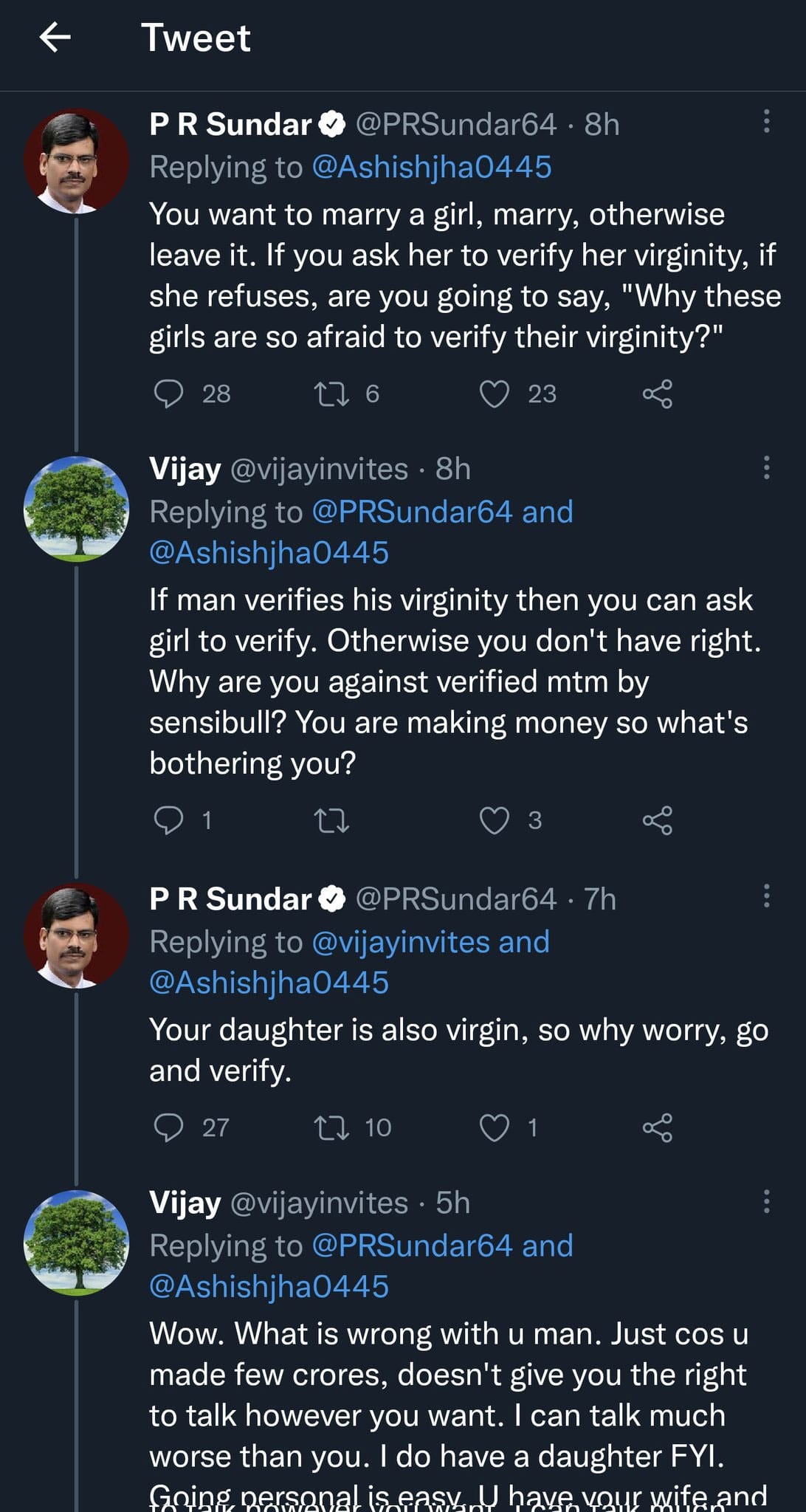 Several Twitter users have now said that they have blocked PR Sundar for his obnoxious comments on women. Some organisations have also come forward to express their shock over the Finfluencer disrespectful words against women/daughters.

Meanwhile, some organisations who had committed for the sponsorship of his Options Conclave 3.0 have now said that they are withdrawing it. The Conclave was to take place in Cochin by the end of December.

Unfollowing and blocking this @PRSundar64 arrogant person
Enough has been tolerated in past also.
(Nothing personal)
Highly immoral and disgusting
Money and fame has taken over his mind.
I haven't blocked a single troller or critic till now. pic.twitter.com/HZQkTl73yT — Harish Sharma (@hsvashistha16) November 27, 2022

Glad I took that Business decision. More than Business, it's Human Values which I give Importance & even if I had to lose 10000 Subscribers, I will never tread down that Path https://t.co/RqWkwIJpvK — Options Scalper (@Justsiva123) November 28, 2022

As a daughter's father, it's painful to see the comment. I know the communication intent was something else, but the execution was extremely poor.

We all face trolls. They don't have character, but we all have and cannot allow anyone to damage the same.

@OiPulse was asked to Sponsor his Dubai event & Glad we took the right decision not to associate with anyone, who doesn't value fellow Humans & disrespectful towards Women.

Thank You @Justsiva123 for taking that right decision, more than business, human values are important.

At https://t.co/rpQJybqEG2 70% of workforce is women.
It’s a women led organisation and it’s pride for us.
We are deeply pained to see those twits from Mr @PRSundar64 .
We have suspended sponsorship of pre-market report. — TaxBuddy.com (@TaxBuddy1) November 28, 2022