Yami Gautam took to her Instagram stories to share a photo of herself with a six-month-old baby - who is named after her by her uncle - who is a very big fan of the actress.

New Delhi: Actress Yami Gautam was overwhelmed by the deep amount of love one of her fans showered on her. The Bhoot Police actress took to her Instagram stories to share a photo of herself with a six-month-old baby - who is named after her by her uncle - who is a very big fan of the actress. In the picture, Yami can be seen wearing a black mask and a top while the little girl is dressed in a vibrant scarlet colour frock.

“Holding the most adorable six-month-old Yami in my arms. So overwhelmed by this gesture of naming your niece after my name @Surehaatul22..Absolutely loved meeting baby Yami and your family. Blessed to have admirers and well wishers like you. Lots of love and respect," the actress captioned her story. 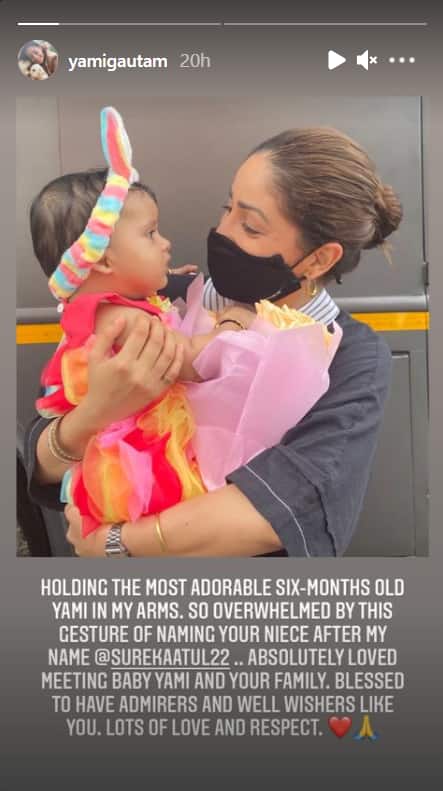 Yami Gautam will next be seen in the horror film ‘Bhoot Police’, which also stars Saif Ali Khan, Arjun Kapoor and Jacqueline Fernandes. The movie is all set to release on September 17.

Yami also has films - 'A Thursday, 'Lost' and 'Dasvi' in her kitty. The 32 years old recently wrapped up the shoot of her film 'A Thursday’ and took to Instagram to share what a beautiful journey it has been.

"It's never a me... it's always a WE , with the best of teams. Bidding adieu to the most beautiful team and taking some fond memories with me from the sets of #AThursday," wrote Yami.

On the personal front, the actress got married to director Aditya Dhar on June 4 in an intimate ceremony in her hometown Himachal Pradesh. The actress has also officially changed her name from Yami Gautam to Yami Gautam Dhar on Instagram.