All set to revive his character in the sequel, director Raj Mehta confirmed Jugjugg Jeeyo 2, and asked for Maniesh's dates in an AMA session on Instagram.

New Delhi: Undeniably touted as the most entertaining part of this year's family drama Jugjugg Jeeyo, Maniesh Paul left an impressive impact on the audience with his vibrant, energetic and entertaining performance in the film.

All set to revive his character in the sequel, director Raj Mehta confirmed Jugjugg Jeeyo 2, and asked for Maniesh's dates in an AMA session on Instagram.

In an interaction with followers on Instagram, Raj Mehta was asked about the sequel to Jugjugg Jeeyo, wherein the director took a funny jibe at Maniesh Paul, mentioning his character Gurpreet saying, "Sab ready hai... Gurpreet sir's  dates are the only problem!" 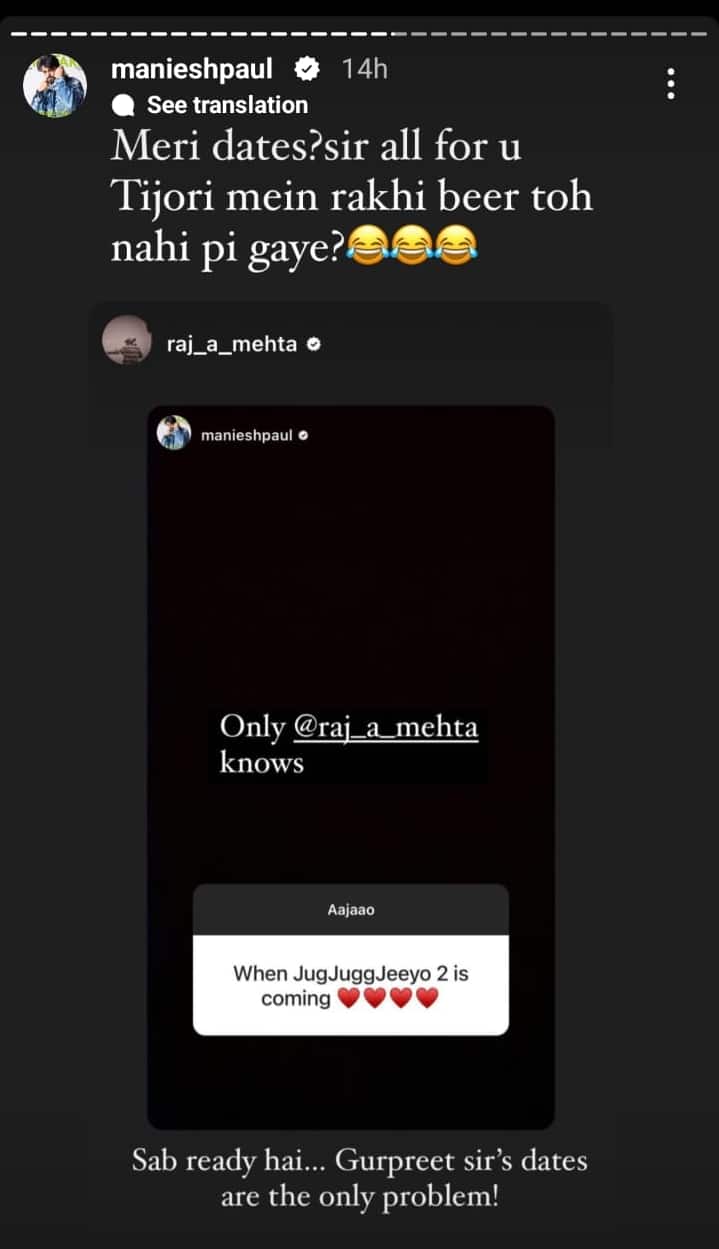 Maniesh was prompt to reply to the same with a reference to a funny scene in the film saying, "Meri dates? Sir all for u Tijori mein rakhi beer toh nahi pi gaye?"

Applauded for his impeccable comic timing alongwith his impressive screen presence, Maniesh Paul is touted as the most entertaining, fun element of the film.

Maniesh especially received praises for his entertaining bromance with Varun Dhawan as well as the camaraderie with Anil Kapoor.

Scaling an impressive journey ranging across platforms and mediums, Maniesh Paul has carved a name for himself amongst the most celebrated and bankable celebrities in the entertainment industry today.

Currently, returning to the much popular and loved reality show Jhalak Dikhlaa Jaa, Maniesh who is known as the Sultan of Stage, is receiving much praises and love for his hosting. In addition, Maniesh is also making a mark with his podcast on YouTube, having delivered numerable heartwarming stories by several celebrities including Bharti Singh, Sharad Kelkar, Elli Avram, Prajakta Koli, amongst others.

Maniesh Paul recently began the shoot for his upcoming web show. Stepping into thriller- drama space for the first time, Maniesh will be seen in a unique and interesting avatar.