Kamaal Rashid Khan, an actor and self-proclaimed film critic, took to social media and slammed the 'Samrat Prithviraj' makers. He shared a picture of an empty theatre which he claims is from one of the theatres which was showing 'Samrat Prithviraj'.

NEW DELHI: Akshay Kumar's period-drama 'Samrat Prithviraj', which made its debut in theatres countrywide, has managed to rake in a little above Rs 10 crore on its opening day. The film has garnered mixed response from the audience and critics as many believe that the actor didn't fit the bill to essay the role of the mighty king. However, a section of people have lauded the team for the historical accuracy and the story.

Kamaal Rashid Khan, an actor and self-proclaimed film critic, took to social media and slammed the makers for allegedly distorting historical facts. He also shared a series of tweets while claiming that 'propaganda cannot work in the foreign market'.

Taking to Twitter, KRK, as he is popularly known, shared a photo of an empty theatre and claimed that the audience did not turn up to watch the film. "First show of #Prithiviraj has started and I am all alone in the theatre. Propaganda does not work in overseas market," he tweeted.

In another tweet he mentioned that afternoon shows of Samrat Prithviraj are not seeing any increase in the number of audiences at the theatres. According to KRK, this film which only meant to serve propaganda has failed miserably. The 'Deshdrohi' actor came down heavily on Akshay's period-drama film calling it 'a disaster'.

Criticizing a sequence from the movie, KRK tweeted that Akshay should be ashamed to do a film where he has to kidnap his brother's daughter to marry her. KRK expressed his anguish at this scene writing that the brother's daughter is like one's own child. He also condemned the death scene of Samrat Prithviraj, writing that the warrior king's death sequence was 'laughable'. 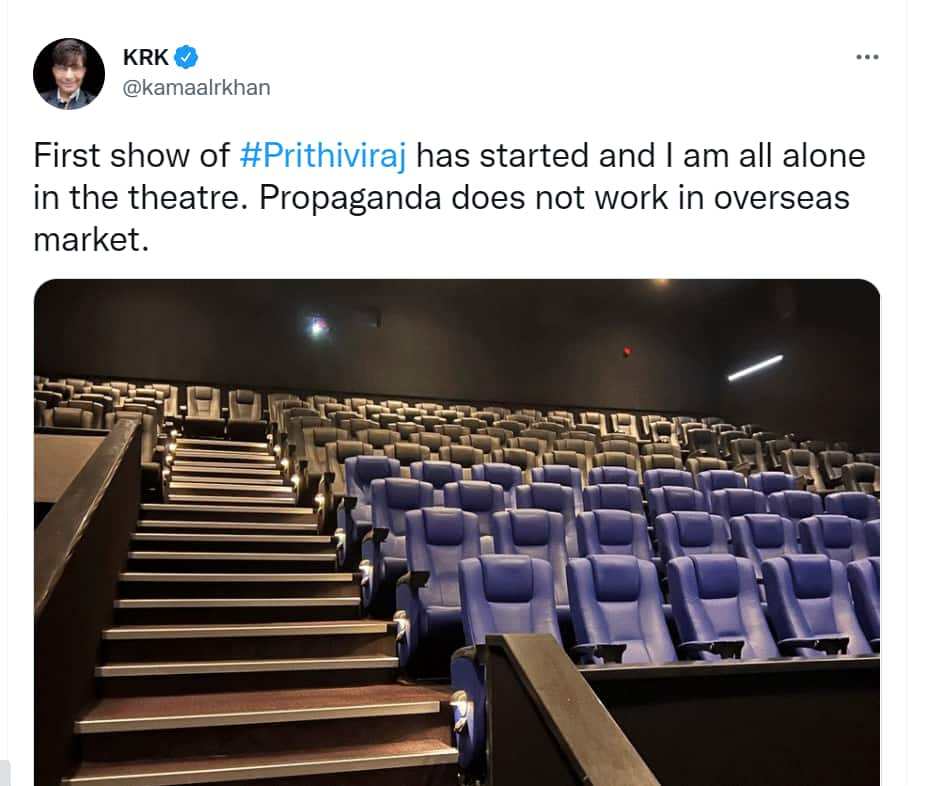 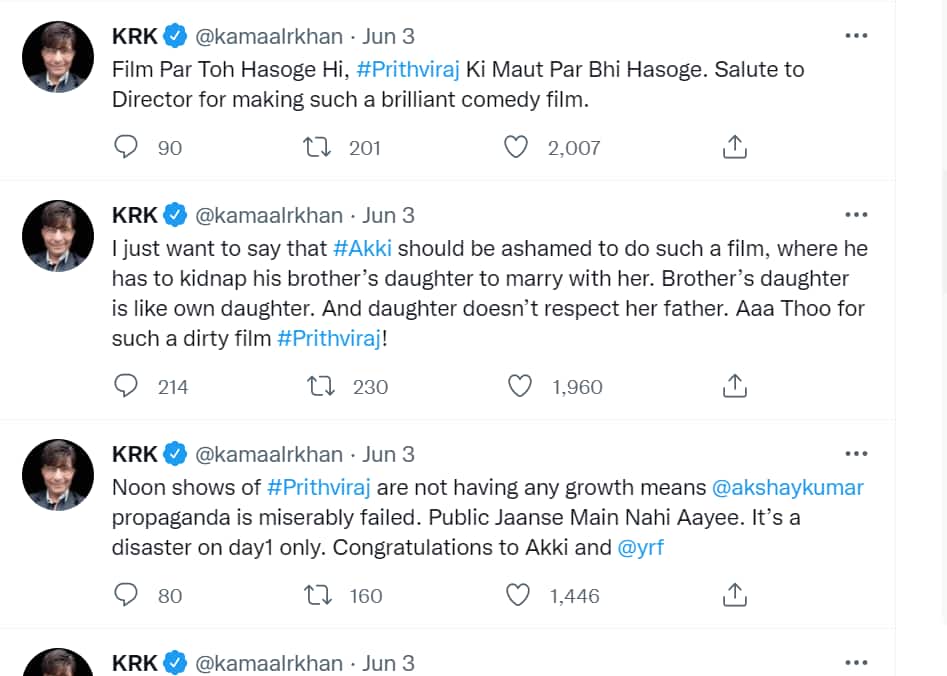 However, not everyone was convinced with KRK trolling the actor and the makers. Some of the users blasted the 'Deshdrohi' actor for attacking Akshay and wrote that while performances of actors can be criticized, but not Samrat Prithviraj who defended his land till his death. Responding to trolls, KRK replied that instead of criticizing him, people should vent out their criticism at Akshay Kumar and Chandra Prakash Dwivedi. According to him, these two have made a joke of Samrat Prithviraj.

#SamratPrithvirajReview: Never expected #Bollywood to make a film with such historical accuracy.

Meanwhile, neither Akshay nor director Chandra Prakash Dwivedi has responded to KRK's tweets yet. Speaking of the Box Office collection of the film, 'Samrat Prithviraj' has collected Rs 11 crore on the first day of its release. However, the opening figures of the film is one of the lowest for Akshay in recent years. His last release 'Bachchhan Paanday', which had released on Holi this year, had collected Rs 13.5 crores on day one, whereas 'Sooryavanshi', which released in November 2021, had made Rs 26 crore at the Box Office.