Directorate General of Civil Aviation (DGCA) has announced to extend the restrictions on SpiceJet, and now the airline will continue to operate 50 percent of its departure until 29 October 2022.

The order from DGCA extending the restrictions read, "The review has indicated that there is an appreciable reduction in a number of safety incidents. However, as a matter of abundant caution, the competent authority has decided that the restriction as imposed in the order dated 27 07 2022 shall continue to be in force till the end of the summer schedule le 29.10.2022, in accordance with the powers conferred under rule 19A of the Aircraft Rules, 1937." 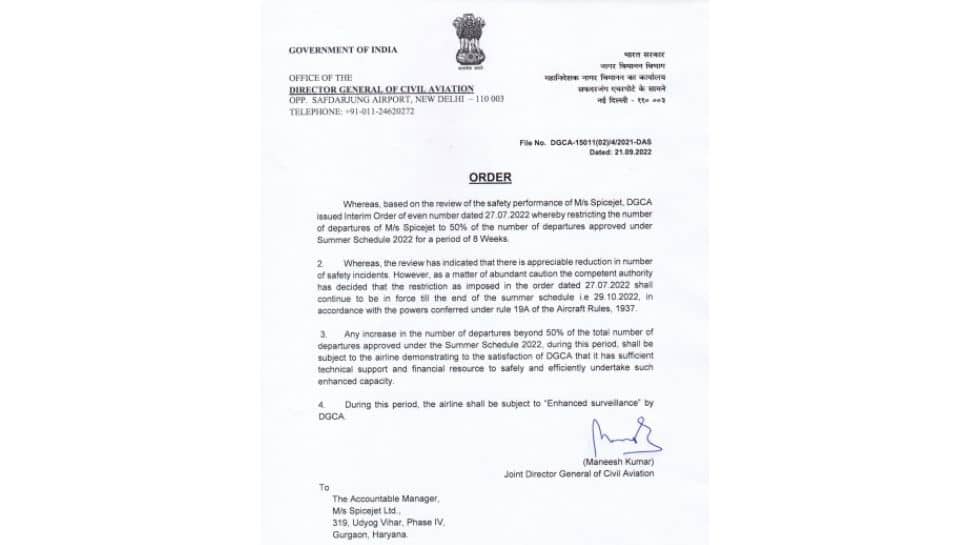 DGCA mentioned that SpiceJet will be allowed to increase its number of departures once the authority is satisfied that the airline has sufficient technical support and financial resources to operate more flights. The order by DGCA read, "Any increase in the number of departures beyond 50% of the total number of departures approved under the Summer Schedule 2022, during this period, shall be subject to the airline demonstrating to the satisfaction of DGCA that it has sufficient technical support and financial resource to safely and efficiently undertake such enhanced capacity."

DGCA has cautioned that SpiceJet will be under "enhanced surveillance" by the authority during this period. Earlier, the airline had reported at least eight technical malfunction incidents between June 19 and July 27, resulting in the restrictions by the authorities.