Maruti Suzuki Jimny 5-door to get only 1.5L petrol engine, NO DIESEL engine on cards

The Maruti Suzuki Jimny 5-door is expected to be showcased at the 2023 Auto Expo with a petrol engine only.

Maruti Suzuki Jimny is ready to break covers in its 5-door iteration in the Indian market at the 2023 Auto Expo. The upcoming offroader is currently on test in the Indian market, and it will soon be seen rivalling multiple offroaders in India. The company is tight-lipped about details regarding the forthcoming SUV, but a recent spy video uploaded on YouTube by Prabhi Singh, reveals some important details about the SUV. The test mule caught on camera in the video has a sticker on its rear windscreen, which carries important information about the Maruti Suzuki Jimny 5-door. The Jimny is codenamed as YWD in India, and the same is visible on the sticker.

Alongside, the Jimny 5-door test mule also reveals that Maruti Suzuki will sell the SUV with a 1.5L petrol motor. To be specific, the K15B power plant will be used here, which misses out on the Dualjet technology but gets the 48V mild-hybrid system. Talking of outputs, the motor peaks out at 105 bhp of power and 138 Nm of torque. While manual variants will get the 5-speed stick shift, automatic variants will come with 4-speed AT or 6-speed AT, which isn’t confirmed yet. 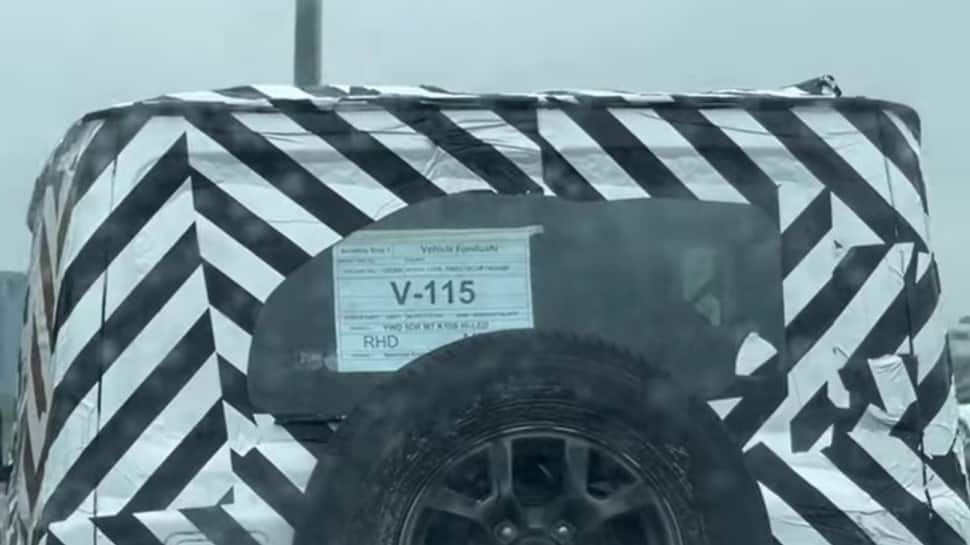 Design-wise, the Maruti Suzuki Jimny 5-door will retain a boxy appeal, and in the video, the YouTuber can be seen speaking about the design, which looks like the G-Wagen. The dimensions of the 5-door model are also leaked. It is expected to come with a 300 mm increment in the wheelbase, which will make its length tape at 3,850 mm, whereas the width and height will remain the same at 1,645 and 1,733 mm, respectively.

As compared to the 3-door model, the Jimny will offer more legroom and interior space to rear seat occupants. The feature list, however, is expected to remain largely the same with the addition of rear AC vents.