Maruti Suzuki Jimny 5-door is anticipated to come to our shores at the 2023 Auto Expo. Here's a neat rendering of the SUV that gives a clear perspective of what it will look like.

The anticipation around the 5-door Suzuki Jimny is higher than the Sauroposeidon. With new spy shots of the 5-door version’s test mule surfacing the internet, it is confirmed that the 5-door Suzuki Jimny is almost outside our doors. The stretched version of the boxy SUV is on every offroader’s mind, who’s on a strict budget. Also, a lot of us want to know what exactly it will look like. Thanks to folks at Motor1 for a neat digital render of the Maruti Suzuki Jimny with an extra pair of doors and some increment in length as well.

In the rendering, the Jimny retains its traditional and upright stance. Quintessentially, design highlights aren’t unchanged as well. It gets circular LED headlamps, a chunky front bumper, black claddings, and a tailgate-mounted spare wheel. 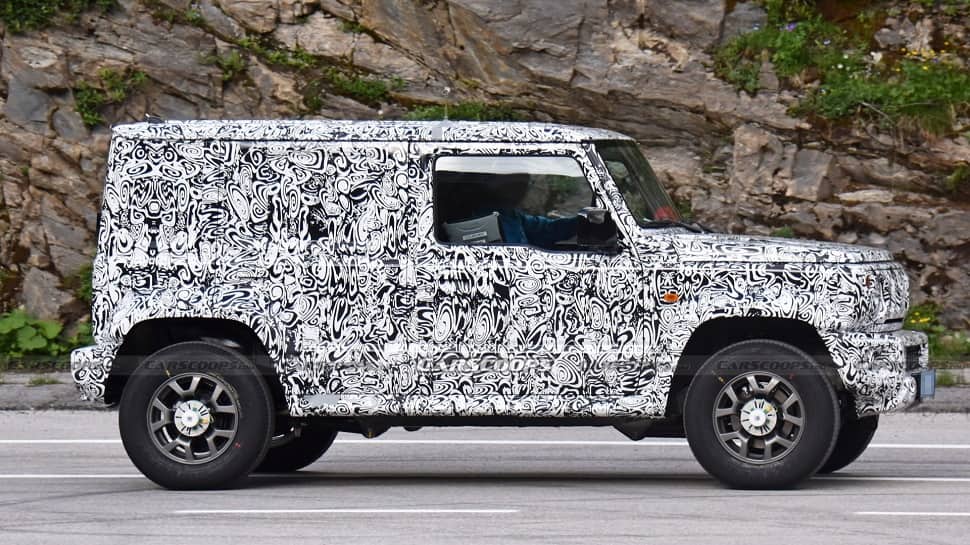 With an extra set of doors, the Maruti Suzuki Jimny will tape less than 4 metres in length. Precisely, it will be 3,850 mm long, 1,645 mm wide, and 1,730 mm tall. The 300 mm increment in the wheelbase over the 3-door model will elevate the interior space and trunk volume on the offroader.

Under the hood, the 5-door iteration of the Jimny will continue to come with the 1.5L motor, paired to either a 5-speed MT or a 6-speed AT. In all likelihood, the NA petrol motor will come with the 48V mild-hybrid setup, as seen on the newly-launched Maruti Suzuki Brezza.

Talking of the launch date, the Maruti Suzuki Jimny 5-door is expected to be revealed at the 2023 Auto Expo, followed by its launch later next year. The Jimny might start from around Rs 10 lakh in the Indian market, and will be sold in multiple trim options. The 4WD layout will come standard on all the variants, along with a low-ratio gearbox.