After spending some kilometres and time with the soon-to-be-launched Mercedes-Benz GLB, here's what we felt about this compact 7-seat luxury SUV.

“Supply always comes on the heels of demand,” said Robert Collier. With the confirmation of Mercedes-Benz GLB’s arrival to our shores, it is pretty much clear - the aforementioned statement holds its ground rather firmly. Since affinity for the three-row SUVs is all-time, the German marque is not ready to miss out on the opportunity to grab a large pie of the cake. Mercedes-Benz will sell the GLB with two engine choices, two gearbox options and in three variants. Yes! We got our hands on the top-spec GLB 220d 4MATIC in the AMG trim, to understand what it exactly is, and how it will find its place in a rather complex market like ours. So, read on to find out what we felt about the GLB after driving it in and around Kodaikanal.

A quick look at the GLB is enough to soak in the design and sputter ‘Baby GLS’. And no one will look at you with a raised eyebrow. The stance is upright and reminiscent of the colossal-sized GLS but in a scaled-down fashion. The nose of the GLB uses a large grille, borrowing cues from the elder sibling, and it does get large rectangular headlamps. The AMG variant we drove had a sportier bumper without the large scuff plate. Neat, it looked. The bonnet gets power domes, amplifying the masculinity of the SUV. 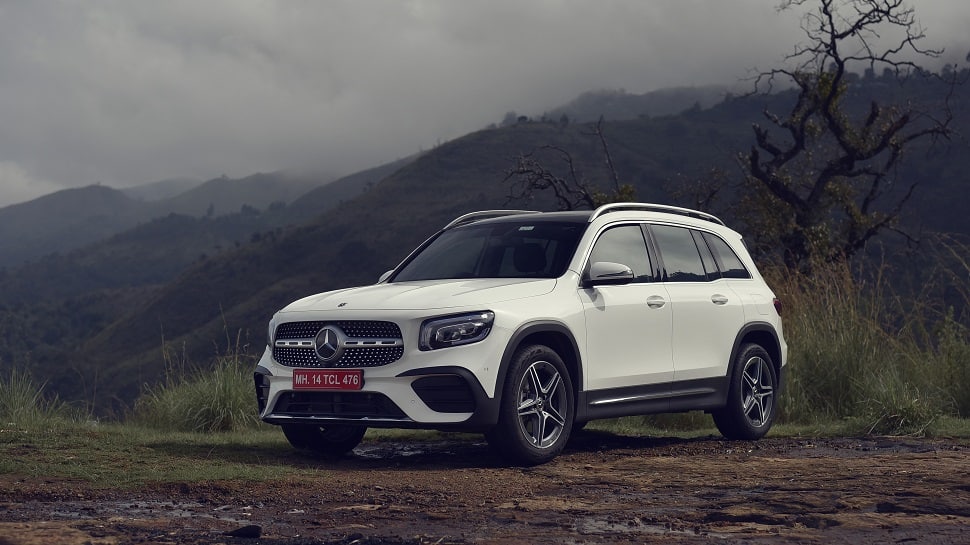 The large glass area is the first to catch attention when gazed sideways. Much like the GLS, it is, except for a kink around the rear portion. While the Progressive trim rides on 18-inch rims, the AMG variant we drove had gorgeous-looking 19-inchers. The tail section is very-much upright and slim tail lamps have a glow pattern identical to the GLS’. Lower down the bumper, there's a chrome-finished element breaking the visual bulk. 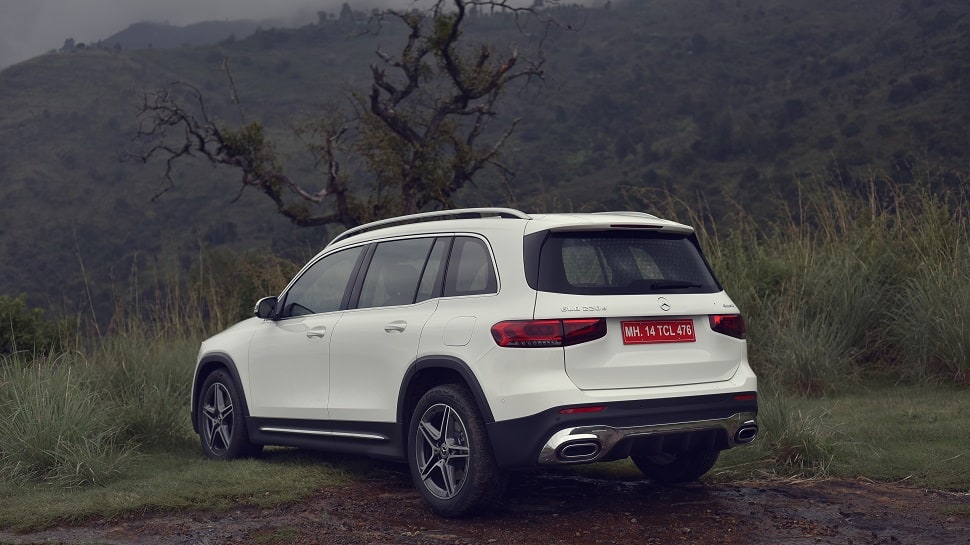 The Mercedes-Benz GLB sits in between the GLA and GLC in the company’s lineup. Hence, the dimensions are pretty much like the GLC too. It is only 12 mm shorter in length than the GLC, by taping itself at 4,646 mm. The GLB is 1,850 mm wide and 1,706 mm tall. Thus, 40 mm narrower and 62 mm taller than the GLC. It does have quite some road presence and manages to look distinctive with so many similarities to its family members. Nevertheless, the GLB and GLS feel like a cut from the same cloth, but for different sizes.

Alikeness is a strong trait of the GLB as the dashboard is identical to the GLA. Therefore, the cabin feels familiar in the first row. There are two 10.25-inch displays that are housed in a single glass panel and are powered by the MBUX interface, which is so immersive that one can write a book on its features. The steering wheel is a unit that we have been seeing on other Mercedes-Benz cars as well. It is great to hold and offers multiple buttons. 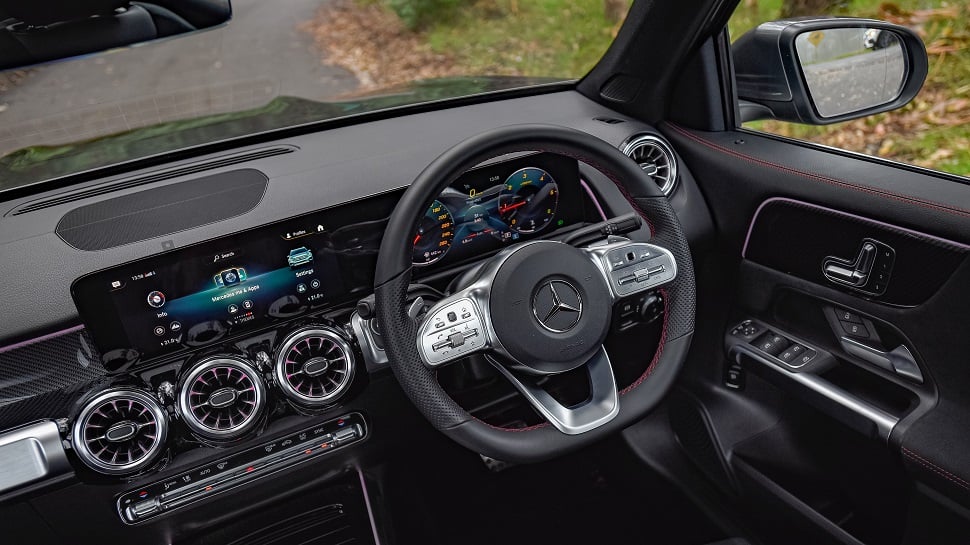 The GLB gets powered seats, and they are pretty comfy. With a large glass area, visibility out is not an issue either. In fact, a commanding driving position is what it offers. Features here include 64-colour ambient lighting, a wireless phone charger, dual-zone climate control, a memory function for seats and more. Alongside, a large panoramic sunroof is on offer too. 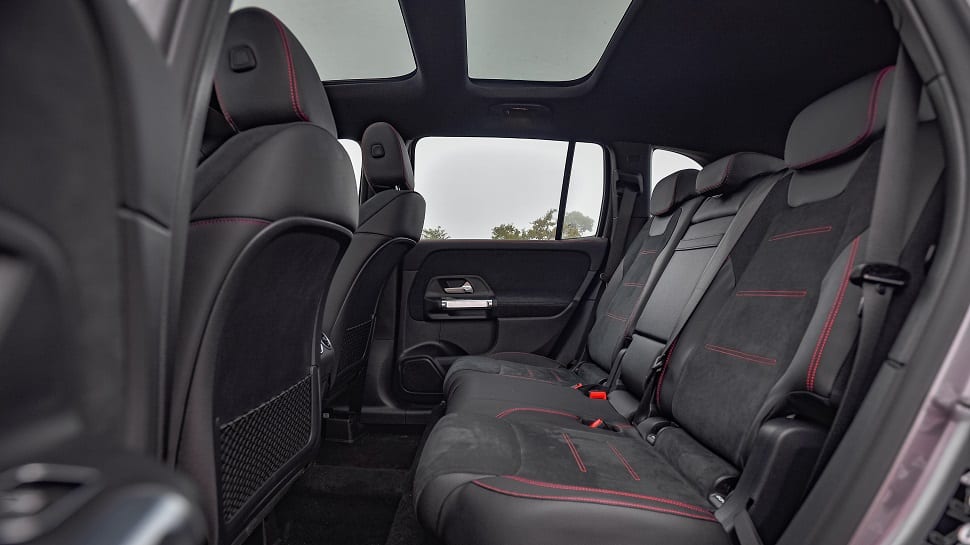 Getting inside the GLB is not a task until the second-row of seats, which are spacious and can slide and recline to increase space for last-row occupants. Furthermore, the middle-row bench gets a USB charging port. However, we felt that the under-thigh support could’ve been better. Talking of the third row, it is best suited for pre-teens, as claimed by the brand. 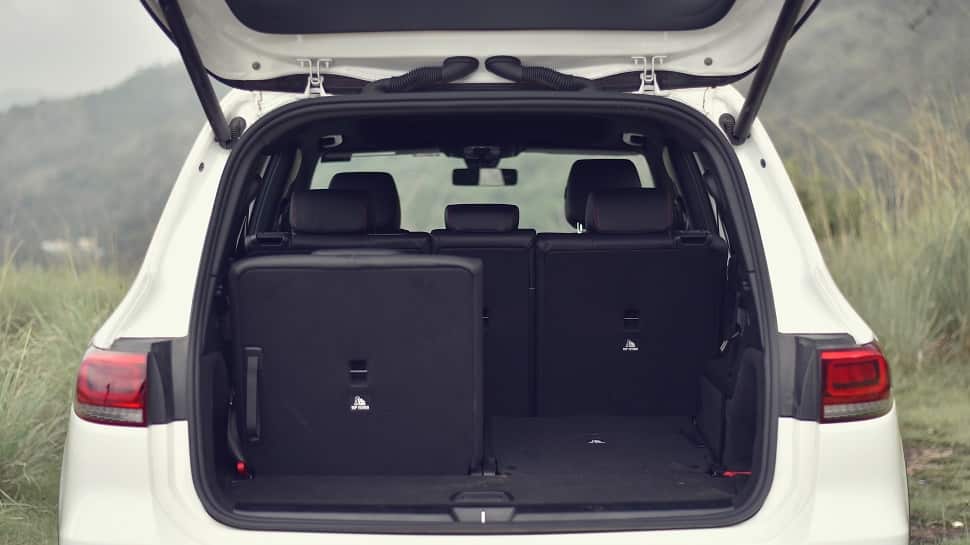 With all seats in place, the boot space is negligible. Folding down the third-row flat increased the trunk volume to a shade over 500 litres. That being said, it has enough space to lug 5 occupants and their luggage without breaking a sweat. Since the GLB is wide, seating three abreast is not a daunting job.

At our disposal, we had the GLB 220d 4MATIC, which gets a 2.0L 4-cylinder turbocharged oil burner. It produces a rated output of 190 hp and 400 Nm. This motor is also used on the GLC and GLA. Coupled with an 8-speed AT, the engine offers a refined driving experience. With multiple driving modes on offer, it can be used in various fashions. Therefore, frugality and performance remain its highlighting characteristics. 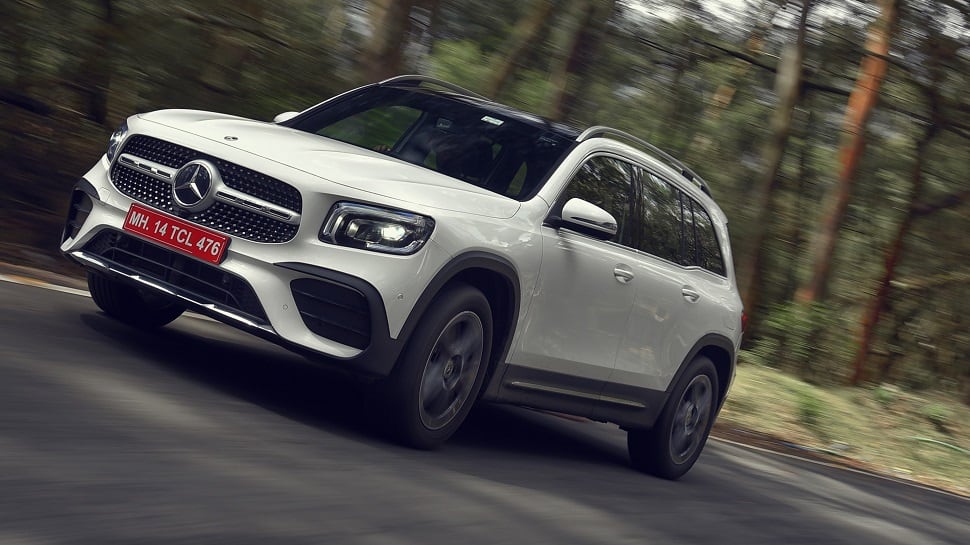 The low-end feels a little bland, with the pedal floored down, thanks to turbo lag. Interestingly, the mid-range is strong-end, and the top-end is acceptable. After all, the engine redlines at only 3,800 clicks per minute. No doubt, it can cruise at highway speeds all day long without any tantrums, whatsoever. Spirited driving isn't much of a fuss either.

To keep the car future-proof, it can also be had with a 1.3L turbo-petrol motor that is paired to a 7-speed DCT. Sadly, we can’t speak about its performance as of now, since we are yet to drive the GLB with the petrol motor.

Dynamically, the GLB turned out to be a rather sorted car. Our test unit had Pirelli P Zero tyres, which offered immense grip on Kodaikanal’s smooth and twisty roads. The steering feels direct, and we have no complaints about it whatsoever.

In fact, the GLB maintains its poise in all sorts of driving conditions. Yes, the body roll is evident, but it can be pushed around corners with ease. Also, lane change manoeuvres are not unnerving. The ride remains smooth for the larger part, and the suspension is tuned to offer a beautiful balance of comfort and dynamics. Stepping on the brake pedal when a KSRTC driver came darting on to us, made us realise - the GLB’s anchors are effective.

Prices for the GLB are not announced yet, but the top-spec AMG trim we drove is expected to cost around Rs 60 lakh, ex-showroom. At this price point, it fits perfectly between the GLA and GLC. While aesthetics are subjective and we found it to be nice-looking, the interior is a practical setup. The oil burner on the GLB is its strong arm, and it will make the GLB eat some GLC sales. Sadly, it will be impossible, because the GLC is sold out for a major part of next year until a new GLC enters our market. Therefore, Mercedes-Benz GLB turns up as a potent offering with a lot on its side.